When Power Fails and You Have Breastmilk in the Freezer

I’ve gotten panicked calls a few times from moms who have frozen breastmilk stored, and their power goes out …. and yikes! Moms will kick into action faster than a hummingbird’s wings when they fear their hard earned frozen milk supply may be compromised!

These three simple points will help you to know that you are handling your milk correctly if power ever goes out on you for an extended period of time. 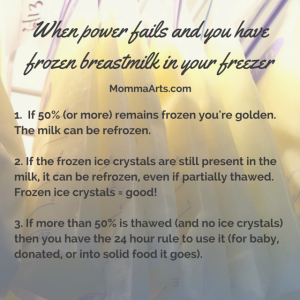 Additionally, a study from 2006 in The Journal of Breastfeeding Medicine failed to show any growth in bacteria after repeated thawing and refreezing of donor breastmilk. How great of someone to actually study this for us!! The milk showed that none of the milk in their trial developed unacceptable bacterial counts, which is the main concern about refreezing milk. The milk was first stored at -4°F  and for two months was thawed and refrozen. It was a pretty cool study where the result aimed to help mothers use more and discard less milk, resulting in better health outcomes for their babies. The article went on to say,

“Based on these data, it appears that unpasteurized milk that has been thawed in the refrigerator for up to 8 hours may be safely refrozen .. This should allow for .. the salvage of milk that mothers might otherwise have been told to discard.”

Snowstorm Obvious Logic: it should go without saying that if snow took your power out and you’ve got a foot of snow out in your yard (if you have one) – get packing! Put that golden elixir out in a homemade cooler of snow and pack it in well (safe from critters) until you can figure out your power situation.

We hope this information is useful to you. Crazy storm weather comes and goes, and it is always good to have information on hand before you’re ever in a situation where you wrongly throw out ounces and ounces of expressed milk (believe me – women have done it and we cringe when we hear it!)  We hope that it doesn’t happen to you, and that everyone one remains safe and happy when a storm passes through. And if it ever happens and you live local – call us! If our freezers are working, we’d be happy to store your milk for you.